Hillcrest exists to glorify God as we: communicate the message of Jesus Christ to those who do not know him, baptize and connect them with other Christians, help all to cultivate their own spiritual growth, and provide opportunities to care for others as we celebrate God together. Hillcrest started their relationship with Adams Thermal Foundation by hosting Child Sponsorship Sundays every year since 2016. In addition, the pastors from Hillcrest visited the schools in Ethiopia in 2018 and then launched a campaign to build the first-ever high school building in Ottoro.

Where Will We Go Next Year?? - One Church's Response to 8th Graders 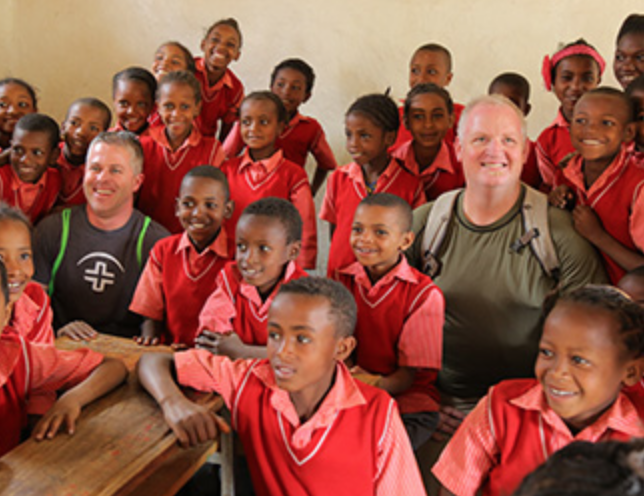 "I didn't want to go to Ethiopia" confessed Pastor Doug Bartel from Hillcrest Church in Sioux Falls, SD. "I've seen plenty of poverty and I knew what I would see in Ethiopia. Plus, the trip is long and I wasn't looking forward to that at all," said Bartel. Still, the reluctant pastor couldn't escape the voice that kept telling him he should go. Not only Pastor Doug, but Associate Pastor Brian Stroh was feeling called as well, potentially leaving the church with no leader for 10 days or longer.

Finally, the lingering thought became more of an urging and both pastors decided to meet with the Adams Thermal Foundation staff over lunch and discuss the logistics of a trip in January of 2018. Previously, representatives from the Foundation had come to Hillcrest Church to talk about child sponsorship, and several members of the congregation had begun relationships with students at Adams Thermal Academies in Hosanna and Ottoro, Ethiopia. Pastors Doug and Brian knew the Ethiopia story well, and so it didn't really seem necessary to make the 20-plus hour journey from Sioux Falls to Addis Ababa.

Still, the flights were booked for late January to escape the sub-zero Midwest and spend approximately a week in sunny-and-70s Ethiopia. Doug and Brian had trekked to central Africa on behalf of their church before, delivering aid to a village in war-torn South Sudan. But liaisons had broken off communications and it seemed this chapter in the book of international missions was closed for the small but committed congregation of Hillcrest Church.

Upon arrival in Addis Ababa, Pastors Doug and Brian collected their carry-on back packs and met the Adams Thermal Foundation staff in the airport parking lot. The Landcruisers that would deliver them to the schools in southern Ethiopia over highly questionable roads stood ready to make the short trip to a nearby hotel for some rest and time-zone calibration.

The next morning, the travel team headed out for the road trip to Hosanna, approximately 220 kilometers southwest of Addis Ababa. Still, the voice that had urged Doug and Brian to fly half-way around the world remained silent and expectations of sights, sounds and smells were met in abundance as the cruisers navigated around gaping potholes, herds of cattle and over-stuffed vans and buses carrying Ethiopians to-and-from the capital. The rural landscape dotted with small plots of hand-worked cropland and mud huts served as reminders of the hardships of life in a developing country.

Upon arrival in Hosanna, the students at Adams Thermal Academy lined up in their customary formation to greet the US visitors with flowers, loud singing and clapping. The kindergarteners held up signs bearing the names of the visitors written in their best Ethio-English penmanship. Tours of the Academy classrooms and lunch with some of the older, English-speaking students was enjoyable and gave testimony to the similarities between visitors and students more so than differences. But still, the voice was silent - no epiphanies or revelations - no lightbulbs turning on or "ah-hah" moments regarding the purpose of this excursion.

It was not until the following day, during the trip to rugged-and-rural Ottoro, that the message was delivered. Visitors to Ottoro have often commented in amazement that a vehicle does not simply fall apart after enduring the punishing roads that connect Ottoro with the main highway. So it could not have been the peace and tranquility of the Ethiopian countryside that rendered the voice audible. The children at Adams Thermal Academy in Ottoro shouted for joy at the US visitor's arrival and the ground shook as all 500-plus students jumped in unison in accordance with their call-and-response singing and clapping. Typically, visitors become overwhelmed at this point with the realization that people who have so little can be so grateful and happy. This coupled with the idea that visitors from America can instantly become rock stars in the tiny secluded village of Ottoro.

As quickly as the celebration of welcome begins, the commotion ends and students move swiftly to their mud-walled classrooms. The pastors visited several classes for introductions, short speeches and selfies. Starting from the youngest grades and progressing to the oldest, it's not difficult to understand the needs of these people and their school while moving from one building to the next. The evidence of malnutrition and disease is obvious. Their uniforms and shoes are barely holding together. Their broken desks and worn-out blackboards are barely noticeable as each room is crammed wall-to-wall with smiling eyes and hopeful faces.

The Academy in Ottoro was originally built for grades K-8 in the hopes that someday, God might bless this prayerful people with a high school. It was during the visit to the 8th grade classroom that the hands were raised and the question was asked by a student to the visitors from the US. "Where will we go next year," a young boy asked, referring to the lack of a high school at the Academy. While this was a common inquiry of US visitors to the school, it was the first time that Doug and Brian had heard of it.

The students at Adams Thermal Academy Ottoro are generally well aware that their opportunity for an education is wholely-sustained by American donors. And without the capacity to fully comprehend the scope of the question, the 8th-graders in particular have become accustomed to innocent but persistent inquiries into the status of a high school. The answer is essentially an issue of capital as the Ottoro campus lacks any extra building space whatsoever. Although land is plentiful.

The Adams Thermal Foundation staff jumped in and answered the question on behalf of the visiting pastors, informing the ambitious young man that there were currently no resources or plan to build. This familiar response was capped off with a reminder that prayer had always been the best source of provision for the school and that it would be again.

As the traveling team completed their tour and staff attended to a few administrative duties before leaving, the group stuck up a conversation with the local elders who watch over the school. Out of curiosity, one of the Adams Thermal staff asked the elders how many students in the area might attend the school if there was greater capacity. The answer shocked all the visitors - "double the current enrollment" or 1,000 more students would attend if they were ever given the opportunity.

Walking back to the Landcruisers, Brian asked Doug, "are you thinking what I'm thinking" The two pastors had worked together for 14 years and had gotten used to reading each other?s non-verbal cues. Doug?s response was immediate, "I think we're supposed to build them a high school." The indefinite pastors, unsure of why they came, had heard their calling with certainty and affirmation.

The next morning, over double macchiatos, Pastor Doug revealed his thoughts from the doodles and scribbles in his journal. His 20th anniversary as a pastor at Hillcrest was coming up in a few months. He knew church leaders were looking for a way to commemorate the event. Pastor Doug would ask his congregation to build a high school building in Ottoro in recognition of his service to the church. Rather than seeking an exotic vacation or the traditional gifts that would mark a major milestone, the pastor unselfishly exchanged the honor of his accomplishment for the chance to lift the poorest-of-the-poor out of deep poverty in Christ's name.

The long-term vision for every at-risk child that attends Adams Thermal Academy is that each of them would be the first in their family to complete high school and earn a post-secondary degree. It is well understood on the lowest rungs of Ethiopian society that education is the key to lifting families and generations out of the poverty cycle. Education is the difference between begging in the streets or lifting an entire country up to a new standard of life and significance.

On Easter Sunday, Pastors Doug and Brian shared their vision for a new high school in Ottoro with the congregation at Hillcrest Church. Jesus has risen from the tomb and forever changed the course of human history. This small congregation could now change history for hundreds or even thousands of children in rural Ottoro, Ethiopia. Pastor Doug, in the wisdom of his senior pastorate, hoped for 10-12 people to become involved. Instead 40 people formed a line in the front of the church after the service and asked to become involved in the high school. Twenty more people stepped forward the following Sunday and God reminded the senior pastor of Hillcrest Church that he still moves in powerful and mysterious ways.

In early May, during another visit from US visitors to the school in Ottoro, the 8th-graders learned that their prayers had been answered. As the news spread throughout the community, back home the donations kept coming in to the church office at Hillcrest. A date was set to present the gift to Adams Thermal Foundation and a giant ceremonial check was filled out with an amount that would be incorrect on the day it was presented. Up to the last minute, donations kept coming in and on August 19th, 2018, the Hillcrest Church congregation in Sioux Falls, SD presented a gift of $51,200 for the building of high school classrooms in Ottoro. In addition, 100 students in Ottoro were individually sponsored by members of the Hillcrest congregation.

As construction begins on the new classroom structure, members of the Hillcrest congregation will involve themselves in the building process through regular planning sessions and conference calls with the Adams Thermal staff, engineers and the building contractor. In late summer of 2019, members of the church plan to visit Ottoro, meet their sponsored children and commission the new high school structure for God's glory and blessing of the Ethiopian people.

Hillcrest Church is one of several congregations that have chosen to partner with Adams Thermal Foundation.ˇAll the churches that have become involved in our programs share common objectives - to become more mission-focused and to engage their membership in the lives of those they seek to serve. Adams Thermal Foundation Academies enroll only the poorest-of-the-poor including orphans, HIV-positive children and those suffering from severe poverty. Churches have the opportunity to impact at-risk students and their families from kindergarten through high school - breaking the poverty-cycle and growing a new generation of leaders for Africa.