Eating and Learning - The Role of Nutrition in Education 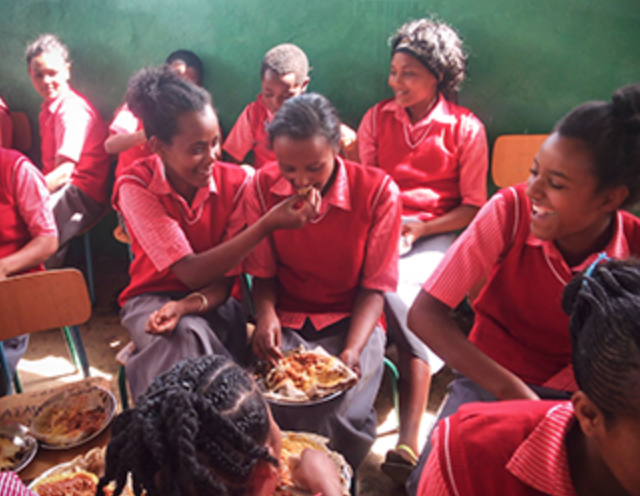 (Photo) Precious food at Adams Thermal Academy Ottoro in Ethiopia. The children are not playing with their food as it appears. Rather, in Ethiopian culture, it is an act of love to feed another person and to share what you have.

When Adams Thermal Foundation launched its child sponsorship program in 2013, photographs of children began to pop up on our sponsorship website. At that time, it was easy to pick out the children that were extremely malnourished based upon their physical appearance. The eyes, the skin, the teeth and their overall stature told a story of universal scarcity and disease. Teachers were calling out the challenges of keeping children awake and attentive - even sharing instances of students fainting and falling out of their chairs. In particular, the school in mountainous and rural Ottoro, Ethiopia involved a strenuous hike each day just to get to school. The village was also more prone to food and water shortages due to it's isolation.

Our school in Hosanna was more urban and connected to reliable sources of food and water. Although our enrollment criteria of serving only the poorest-of-the-poor kept students from enjoying the benefits of regular meals that are nutritionally balanced. A meal program was already in place when the Foundation took over the school in Hosanna in 2013. Water collection tanks served by a municipal water system also ensured that students had clean water to drink and for hand washing. The difference between the Hosanna students and the Ottoro students on the sponsorship website was obvious - so much so that even casual observers might ask, "what's wrong in Ottoro"?

As soon as we became aware of the nutritional and developmental deficiencies in Ottoro, we began putting together the pieces of a plan to implement regular meals and clean water access at the school. Without any infrastructure, we would need the means and methods of food supply lines, storage, preparation and serving as well as a new reliable water system to replace an old gravity-fed line that had corroded and dried up. We began with seeking out a delivery vehicle that could travel the rough the rough roads and transport supplies from local communities. Next came the buildings necessary to store food staples for 500+ children and some staff. Then came the kitchen and dining halls, built from indigenous wood poles, mud, grass, rocks, concrete and rolled tin. Last came the new gravity-fed water system which originated from a source 5 kilometers away at approximately 10,000 feet above sea level. The system would not only supply the school but also 3,000 other members of the local community.

In November of 2017, all the pieces were in place for students to enjoy a nutritious meal and clean water for drinking and washing. The celebration of these new resources at the isolated school was unprecedented and attributed to decades of prayer lifted up by current and previous generations. A church in the United States provided all the food for the first year of operations until child sponsorships could grow and cover the cost.

Already, the academic performance of students has shown improvement and behavioral issues due to malnutrition have been dramatically reduced. Medical issues that were largely gastrointestinal and attributable to poor sanitation and water quality are down sharply. Not only does the access to food and water aid the educational process, but this provision also incentivizes poor families to keep their children in the school program rather than requiring them to stay home and work.

While the first year of food supplies was provided by generous donors, child sponsorships in our program have still not grown to adequately cover the meal program in the coming year. If you would like to help provide food to the children in Ottoro, please call 877-678-1099 or email info@adamsthermalfoundation.org.